Abstract
We previously reported that oral administration of black raspberry powder decreased promoter methylation of tumor suppressor genes in tumors from patients with colorectal cancer. The anthocyanins (ACs) in black raspberries are responsible, at least in part, for their cancer-inhibitory effects. In the present study, we asked if ACs are responsible for the demethylation effects observed in colorectal cancers. Three days of treatment of ACs at 0.5, 5, and 25 μg/ml suppressed activity and protein expression of DNMT1 and DNMT3B in HCT116, Caco2 and SW480 cells. Promoters of CDKN2A, and SFRP2, SFRP5, and WIF1, upstream of Wnt pathway, were demethylated by ACs. mRNA expression of some of these genes was increased. mRNA expression of β-catenin and c-Myc, downstream of Wnt pathway, and cell proliferation were decreased; apoptosis was increased. ACs were taken up into HCT116 cells and were differentially localized with DNMT1 and DNMT3B in the same cells visualized using confocal laser scanning microscopy. Although it was reported that DNMT3B is regulated by c-Myc in mouse lymphoma, DNMT3B did not bind with c-Myc in HCT116 cells. In conclusion, our results suggest that ACs are responsible, at least in part, for the demethylation effects of whole black raspberries in colorectal cancers.

Conclusion
.In conclusion, we found that anthocyanins derived from BRBs are taken up into the cytoplasm and nucleus of cultured human colon cancer cells. They demethylate tumor suppressor genes through inhibition of DNMT1 and DNMT3B. Based on the fluorescence staining results, ACs may inhibit DNMTs through direct as well as indirect target(s). Future studies aimed on identifying these targets are warranted
.
Source : Nutrition and cancer
Link to Full Article

Anthocyanins in Black Raspberries Prevent Esophageal Tumors in Rats
Abstract Diets containing freeze-dried black raspberries (BRB) suppress the development of N-nitrosomethylbenzylamine (NMBA)–induced tumors in the rat esophagus. Using bioassay-directed fractionation, the anthocyanins in BRB were found to be the most active constituents for down-regulation of carcinogen-induced nuclear factor-κB and activator protein-1 expression in mouse epidermal cells in vitro. The present study was undertaken, therefore, to determine if the anthocyanins contribute to the chemopreventive activity of BRB in vivo. F344 rats consumed diets containing either (a) 5% whole BRB powder, (b) an anthocyanin-rich fraction, (c) an organic solvent-soluble extract (a–c each contained ∼3.8 μmol anthocyanins/g diet), (d) an organic-insoluble (residue) fraction (containing 0.02 μmol anthocyanins/g diet), (e) a hexane extract, and (f) a sugar fraction (e and f had only trace quantities of anthocyanins), all derived from BRB. Animals were fed diets 2 weeks before treatment with NMBA and throughout the bioassay. Control rats were treated with NMBA only. Animals were killed at week 30, and esophageal tumors were enumerated. The anthocyanin treatments (diet groups a–c) were about equally effective in reducing NMBA tumorigenesis in the esophagus, indicating that the anthocyanins in BRB have chemopreventive potential. The organic-insoluble (residue) fraction (d) was also effective, suggesting that components other than berry anthocyanins may be chemopreventive. The hexane and sugar diets were inactive. Diet groups a, b, and d all inhibited cell proliferation, inflammation, and angiogenesis and induced apoptosis in both preneoplastic and papillomatous esophageal tissues, suggesting similar mechanisms of action by the different berry components.


Esophageal cancer is the third most common gastrointestinal malignancy (1) and the sixth most frequent cause of cancer death in the world (2). Squamous cell carcinoma is the predominant histologic subtype worldwide, and persons with this disease have a high rate of mortality (3). It has been estimated that more than two thirds of human cancer can be prevented through appropriate lifestyle modifications (4). Although Doll and Peto (5) reported that ∼35% of human cancer mortality is caused by diet, more than 250 population-based studies, including case-control and cohort studies, indicate that persons who eat about five servings of fruit and vegetables per day have approximately half the risk of developing cancer—particularly cancers of the digestive and respiratory tracts—than do those who eat fewer than two servings per day (4). Chemoprevention can play an integral role in the overall strategy of reducing the incidence of cancer and is a potentially viable approach for reducing the risk of esophageal cancer in high-risk individuals (6).

Experimental studies provide evidence that dietary compounds prevent cancer through multiple mechanisms (4). These include the induction of cellular detoxifying and antioxidant enzymes, which protect against cellular damage caused by carcinogens and endogenously generated reactive oxygen species. Dietary compounds can also reduce cell proliferation rates, inflammation, and angiogenesis and stimulate apoptosis, normal cell differentiation, and cell-cell adhesion, among other effects (4). Because the process of cancer development involves multiple stages (i.e., initiation and promotion/progression), chemopreventive compounds have been classified broadly as blocking agents, which impede the initiation stage, or as suppressing agents, which arrest or reverse the promotion/progression stage (7).

Anthocyanins are naturally occurring polyphenolic compounds that provide pigmentation to many fruits and vegetables, such as berries, red grapes, purple sweet potato, and red cabbages (8). Berries are rich in anthocyanins, which account for ∼5% to 10% of their dry weight (9). We and others have suggested that anthocyanins may be cancer preventive because they (a) inhibit cell transformation, in part, by blocking the mitogen-activated protein kinase pathway and activator protein-1 expression (10); (b) suppress inflammation by blocking the nuclear factor-κB (NF-κB) pathway and cyclooxygenase 2 (COX-2) gene expression (10); and (c) induce apoptosis in cancer cells through the activation of reactive oxygen species/c-Jun NH2-terminal kinase–mediated caspases (8). 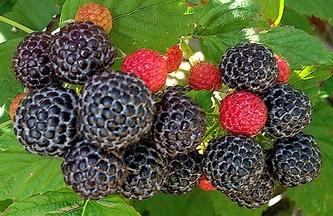